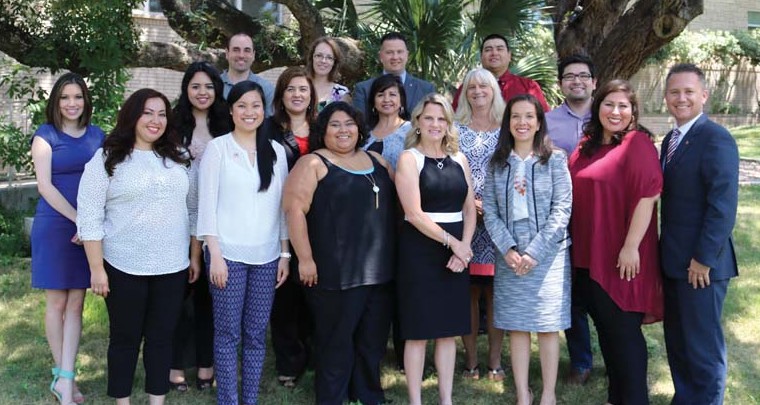 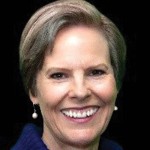 Reinette King ’73 BA (pictured right) was appointed by the City of San Antonio in June 2015 to the City Zoning Commission. She has served as president of the El Dorado Homes Association since 2011.

Antoinette Mulvaney ’78 BA is the director of accreditation and teaches law in the College of Business at Lamar University.

Elizabeth Verhelst ’81 BS is an employee at Nix Healthcare and working towards her Master of Healthcare Administration from Webster University.

Joe Libby ’85 BA is an entrepreneur, working as a ventriloquist and comedy magician. Libby fully supports the Cystic Fibrosis Foundation, inspired by his niece who attends Incarnate Word High School. There will be a community event in October to raise money and awareness for CFF. The event will be a family-friendly comedy show, and it’s also designed to help the youth of Our Lady of Sorrows Catholic Church and the St. Vincent de Paul Food Pantry. For more information, please email joelibby@att.net.

Maria Goodwin (Diaz) ’90 BA submitted her proposal to the University Research Review (URR) this fall. The title of her research proposal is “Parental Self-Efficacy and Feeding Practices and Styles and Obesity in Mexican-American Children.” She is scheduled to become a Ph.D. candidate in public health next quarter.

Phyllis Gordon ’90 MSN was recently named the president of the Society for Vascular Nursing.

Laura Alaniz ’92 MA has been named the new principal of Harvard Elementary School in Houston, Texas. 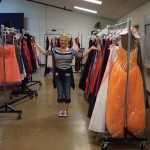 Lynette Best Gray ’93 BA (pictured left) started a resale prom dress, shoe and accessory collection known as PROM REDEAUX in June of 2014 and was able to help almost 400 girls go to prom this year. She intended to help girls in Wilson and Guadalupe Counties but had so many dresses she was able to help girls in need at six area San Antonio schools. Gray works at River City Waste in San Antonio and is the co-owner of Bear Wash in La Vernia and Best Waste in Seguin.

Raul Solis ’94 MBA (pictured right) retired from the United States Air Force Reserves on May 31, 2015 after over 37 years of service.

Charles Olmsted ’96 MA published his second book, “The Good, the Bad, the Butlers: Story of a Texas Pioneer Family.” It tells about a family’s move to Texas in 1852 and how they became part of the multi-billion dollar cattle industry.

Elise Smyrl Lopez ’98 BA just completed an M.A. in theatre arts from the University of Houston in May 2014. Lopez is now enrolled at Texas A&M-San Antonio to complete an M.A. in educational leadership and pursue an administrative leadership position in 2017. 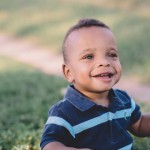 Tracy Gies ’05 MAA has been admitted to the Doctor of Education program in interdisciplinary leadership at Creighton University.

Jennifer (Balleza) Gonzalez ’05 BA accepted a position with the City of San Antonio as an event coordinator/house manager for the Carver Community Cultural Center.

Lina Garza ’06 MBA started her career with New York Life Insurance Company in 2009 as the first senior associate for the Hispanic Market Initiate in the San Antonio General Office. She helps develop and form many of the programs the departments utilize to help support the general office through various strategies such as recruiting, agent training and development, and community marketing and support. Garza was recently promoted to Latino Market field manager for the West Central Zone for New York Life Insurance Company. She will continue to serve the Latino community by building awareness about the importance of life insurance and financial planning. She will also continue to search for candidates seeking the opportunity for a rewarding career working in the Latino community.

Xochitl Hinojosa ’06 BA was recently named the director of coalitions press for the Hillary Clinton presidential campaign. Hinojosa served at the U.S. Department of Labor under Secretary Tom Perez for almost two years prior to joining Clinton’s campaign. 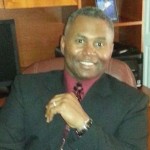 Kenneth Chapman ’08 MBA (pictured left) retired November 2013 from active military service with the rank of major after 22 years of dedicated service to the country. He continues to serve our country in government civil service as one of five chief operating officers (COO) for the U.S. Army regional Exceptional Family Member Program (EFMP) overseeing 13 Army EFMP sites. He works diligently to ensure medical services are available for service members’ families with special needs around the globe.

Jessica Martinez ’09 BS earned a bachelor’s degree in dental hygiene from the University of Texas of Dentistry in Houston, Texas, and will be a registered dental hygienist practicing in Houston. 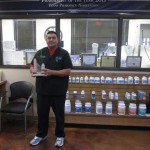 Chris Alvarado ’10 PharmD, who graduated in the Feik School of Pharmacy’s (FSOP) inaugural class of 2010, was recently named the 2015 Pharmacist of the Year by the Texas Pharmacy Association. The award recognizes a pharmacist who has made outstanding contributions to the Texas Pharmacy Association and its mission during the past year. In September, Alvarado was recognized for the award by the San Antonio City Council.

“I have always had a passion for pharmacy, helping patients and giving back to those less fortunate, but as a San Antonio native I did not want to leave this great city,” said Alvarado. “I am grateful to the University of the Incarnate Word-Feik School of Pharmacy, Dr. (Arcelia) Johnson-Fannin, Dr. (Louis) Agnese and former Chancellor Dr. (Terry) Dicianna for providing me the opportunity to fulfill my dream of becoming a pharmacist. I will strive to put FSOP on the map as one of the best pharmacy schools in the United States.” 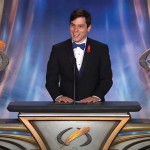 ach Chapman ’11 BA (pictured left) from San Antonio, Texas was honored April 12 at the 31st Annual L. Ron Hubbard Achievement Awards at the prestigious Wilshire Ebell Theatre in Los Angeles, Calif. The event celebrated the annual winners in the L. Ron Hubbard Writers and Illustrators of the Future Contests, where Chapman was one of twelve winners chosen from several thousand applicants to the international competition. Chapman’s story was published in the bestselling science fiction anthology series, L. Ron Hubbard Presents Writers of the Future Volume 31.

Meagan Jacobs ’08 BS ’12 PharmD is working on getting her nonprofit The Giving Spot up and running. The nonprofit is a new type of coffee shop, giving 50 percent of all its profits to Haitian orphans through FEPE (Foyer Espoir Pour Les Enfants). The coffee shop uses two suppliers for their authentic Haitian coffee. For more information, visit www.thegivingspot.com/

Tiffany Leavelle ’12 BFA is a part of the online exhibit “Autism Ambitions: Creating Careers for Individuals with Autism,” where her art is displayed and available for purchase. The organization, Autism Ambitions, helps adults with autism to become financially independent. View her paintings at www.autismambitions.com/#!tiffany/cswr 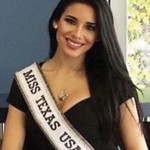 Ylianna Guerra ’14 BA was crowned Miss Texas USA 2015 in August in a competition that featured 114 contestants throughout the state. Originally from McAllen, Texas, she represented the Tropics of Texas in the pageant. Guerra then went on to represent Texas in the 2015 Miss USA pageant, where she finished first runner-up. The pageant was held in Baton Rouge, La., in July and broadcast on the Reelz Channel. Recently, she was employed as assistant director for media at EnviroMedia in Houston. EnviroMedia is a full-service public relations firm specializing in improving public health and the environment. 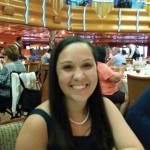 Ellyse Sanchez ’14 MA (pictured left) is now working at the University of Texas as a financial assistance officer. Before graduating in December 2014 with a Master of Arts degree, she worked as a graduate assistant for University Events and Student Programs in Campus Life at UIW.

Kristen Amaro ’15 BS is a new missionary with Incarnate Word Missionaries (IWM). She is joined by Yvonne Moynihan, who is an educator from Cork, Ireland. Amaro learned of IWM through a Dublin-based partner, Viatores Christi of Dublin. They will spend time in formation and fellowship with the CCVI Sisters and Women’s Global Connection (WGC). In Chimbote, Peru, Amaro, who is interested in medicine, will work at Hospice in the Verbo Encarnado Sistema de Salud, a ministry of the Sisters of Charity of the Incarnate Word founded by Sr. Juanita Albracht. 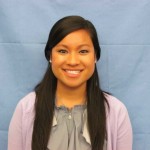 Lillian Nguyen ’15 DPT (pictured left) was honored during the American Physical Therapy Association NEXT Conference & Exposition. She received the APTA’s Minority Scholarship Award acknowledging academic excellence, participation in minority affairs activities and services, the potential for superior achievements in the profession of physical therapy, and display of professionalism as a future physical therapist. 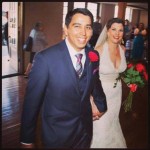 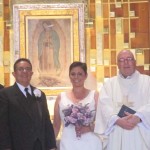 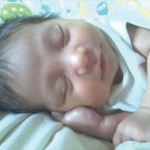 Diana Meneses Iwai ’02 BA (pictured left) and her husband Casey are headed back to live in Arizona as new parents to Mari, born Aug. 12, 2015.

Olga Clark’s ’07 BA ’14 MAA daughter Alexis will be graduating from high school in June and will be starting at UIW next fall. 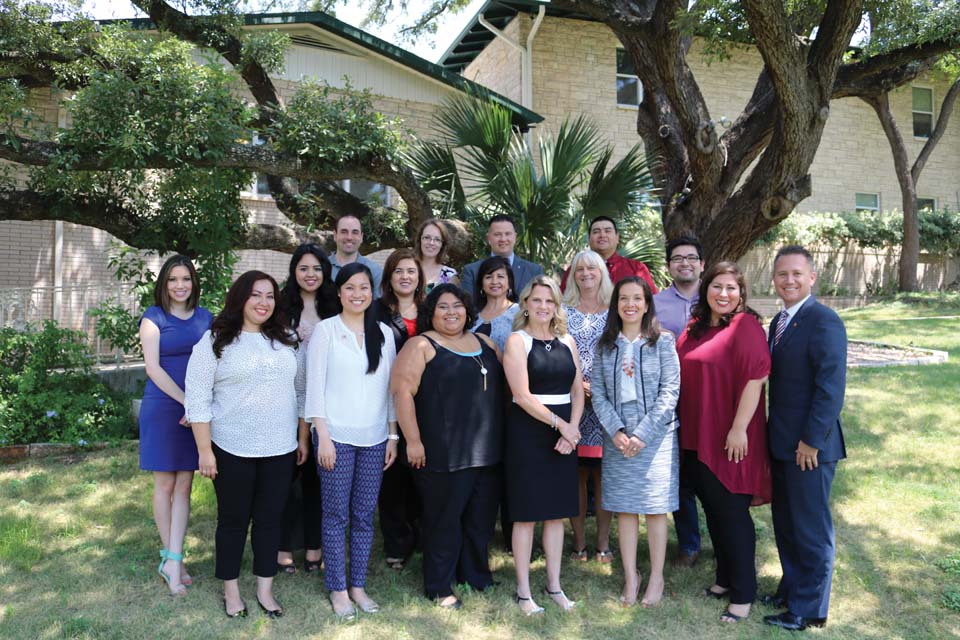 Executive Board of Directors:

Ex-Officio Board of Directors:

James A. Delaney, parent of former student and benefactor