UIW students took the reins toward sustainability this spring by participating in RecycleMania, an annual competition for universities across the country to help promote waste reduction activities on campus. The initiative occurs over an eight-week period each spring. The amount of recycling and trash collected each week are reported and in turn ranked in various categories based on who recycles the most on a per capita basis.

There exists a Competition Division where universities compete against each other, and a Benchmark Division where the university does not compete nationally but internally to bring awareness to the school by setting a collection goal. That’s what UIW’s Student Government Association (SGA) decided to do.

“At first I wanted to do a competition among organizations or housing because I felt that if we want to continue to keep this campus beautiful it starts with them,” said Pena. “Pompeyo thought it was a good idea and saw where I was going but he asked about commuters. After going back and forth bouncing ideas from each other, we thought of the perfect solution; open it up to the campus and have a set goal of 16,000 pounds.”

Pena, with the support of the SGA executive council, decided to forego the use of traditional flyers and posters to promote the campaign, instead using social media and meeting with different university organizations to spread the word. SGA, SustainUIW and the UIW Community Garden held a RecycleMania Kickoff to promote the initiative. Collecting recyclable material from Feb. 3 until March 30, the university surpassed the goal of 16,000 pounds.

“I am proud of our school for an outstanding job and being aware of what recycling can do for our university,” said Pena. 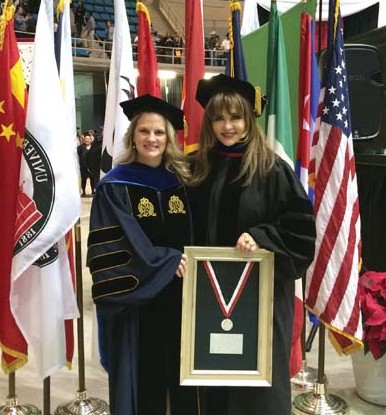 UIW Celebrates the Class of 2011