UIW Celebrates the Class of 2011

The University of the Incarnate Word celebrated the fall class of 2011 at two commencement ceremonies. 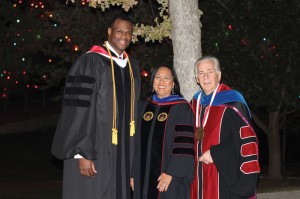 David "The Admiral" Robinson, UIW Board of Trustees member Nancy Kudla, and UIW President Dr. Louis Agnese at the graduation ceremony held Friday, Dec. 9. Robinson graduated "With Distinction" with a Master of Arts in Administration and a concentration in Organizational Development.

The first ceremony was held Friday, Dec. 9, and honored graduates of the university’s masters and Ph.D. programs. Tejano music star Patsy Torres graduated with a Doctor of Philosophy and became a UIW triple threat having also earned both her undergraduate and masters degrees at UIW. Former San Antonio Spurs star David “The Admiral” Robinson, a student of UIW’s Virtual University, graduated with a Master of Arts in Administration, with a concentration in Organizational Development. Robinson also graduated “With Distinction,” an honors designation.

The commencement ceremony held Saturday, Dec. 10 honored more than 600 students earning their bachelor’s degrees. The outdoor ceremony experienced inclement weather so a graduation reception was held on Sunday, Jan. 8 in the Convocation Center to allow graduates an opportunity to celebrate with their families, friends and UIW faculty.

At Saturday’s commencement ceremony, Louis “Papa” Agnese received an honorary bachelor’s degree. At nearly 97, Papa is the oldest recipient of a UIW degree. He received a Bachelor of Humane Letters.

The Insigne Verbum award was also presented to Dr. Fernando Guerra. The Insigne Verbum Award recognizes individuals who have contributed meritorious service to the community and who represent and carry out the Mission of the Sisters of Charity of the Incarnate Word.

Guerra is the former director of the San Antonio Metropolitan Health District (Metro Health) and a long-time practicing pediatrician. He serves his community as a clinical professor of pediatrics at the University of Texas Health Science Center at San Antonio, an adjunct professor in public health at the Air Force School of Aerospace Medicine, Brooks Air Force Base, and is an adjunct professor at the University of Texas School of Public Health in Houston. 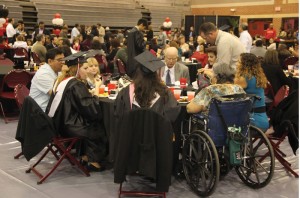 UIW graduates gathered with family, friends and faculty members to celebrate their accomplishment at the graduation reception held Sunday, Jan. 8 in the Convocation Center.

The commencement speaker for both ceremonies was UIW Moody Professor William Gokelman, who is chair of the UIW Music Department. He directs the Chorale, the Cardinal Singers, teaches piano, is a vocal coach, and conducts. Gokelman is a national and regional presenter/performer for the National Association of Pastoral Musicians (NPM). The Moody Professor traditionally delivers the Commencement address to the December graduates and this address is often considered the students’ “last class.”