In this issue, meet Board of Trustees member Richard T. Schlosberg, III 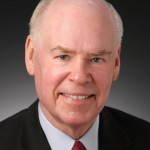 UIW Board of Trustees member Richard Schlosberg fondly recalls his first encounter with UIW President Dr. Louis Agnese, Jr. In 2004, upon returning to San Antonio where he began his career two decades earlier, he and his wife Kathy were the guests of honor at a “welcome to town” party thrown by then San Antonio Express-News publisher Larry Walker. One of the guests happened to be Dr. Agnese who immediately approached him, shook his hand and noted that UIW had never received money from the Packard Foundation, a foundation Schlosberg had led since 1999.

“I was impressed by Lou’s unabashed fundraising and love for Incarnate Word,” said Schlosberg. “His approach is very effective.” Since joining the board in 2006, Schlosberg has been an advocate for UIW, fundraising with the world beyond San Antonio and reaching out to foundations and friends he has made throughout his career.

“It is my job to make friends and fundraise on behalf of UIW,” Schlosberg remarked. He feels fully informed of projects and goals at the university and believes that makes it easier to go out into the community and speak on UIW’s behalf. He is most impressed by the transformative role in education that UIW plays in San Antonio. “To see firsthand the impact that education has on young people…well there is just no finer way to spend your time.”

Schlosberg is the former Publisher and CEO of the Los Angeles Times and immediate past president and CEO of the David and Lucile Packard Foundation, a position he held since 1999. In 2004, Schlosberg became a founding director of The Bank of San Antonio, Bandera First State Bank and San Antonio Capital Management.

Schlosberg is active in both civic and professional organizations. He is currently a board member of eBay and of Edison International. He is also currently the Chairman of the Board of the Kaiser Family Foundation and a founding director of the United States Air Force Academy Endowment, a charitable foundation supporting the Air Force Academy.

A graduate of the United States Air Force Academy, Schlosberg attended Harvard Business School where he earned a master’s degree with honors. He served five years as an Air Force pilot and is a veteran of the Vietnam War. In 2003 Schlosberg was honored by the Air Force Academy and named one of its distinguished graduates.

Schlosberg and his wife, Dr. Kathy Schlosberg, are truly an “Incarnate Word family.” Dr. Schlosberg has served as an adjunct professor in UIW’s Dreeben School of Education since 2005. They live in San Antonio and have two grown children and four grandchildren.