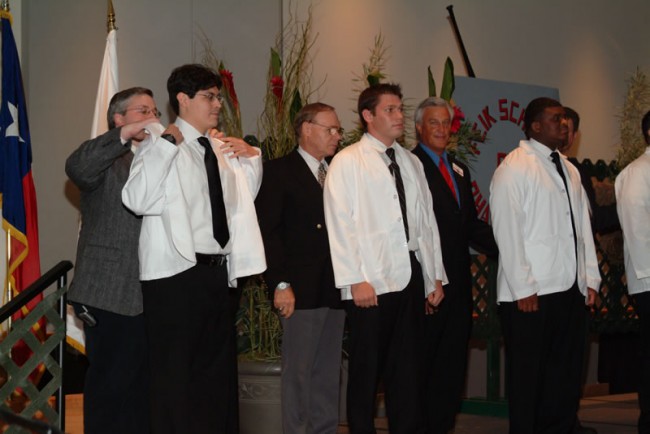 Pharmacy freshmen don their white coats, a symbol of commitment to the profession of pharmacy, at the first White Coat Ceremony in September 2006. Students pledged to provide the best patient care possible.

Despite the struggles, occasional all-nighters and a few tears, the inaugural class of the Feik School of Pharmacy graduated with flying colors.

These graduates began their studies four years ago, and this May, UIW sent 67 Doctor of Pharmacy graduates out into the world to serve and mature in their field.

Through the years, the students bonded with each other and with their professors.

“We’re such a close-knit family. There’s the joy of graduation, but it’s a bittersweet end,” said Nicole Bryson, a pharmacy graduate who was elected to speak at the Oath and Hooding Ceremony on May 6.

Johnson-Fannin hopes that these young pharmacists will remember a point she has emphasized to them many times during their years of study: “Nothing about what you do is routine; it’s life or death.”

She recalled a memory from her early days as a pharmacist. The long hours had gotten the best of her; she was exhausted and in “routine mode.” She was working on a prescription and followed the physician’s instructions exactly, even though she knew it was wrong. Thankfully, someone else caught the doctor’s mistake. That’s when she realized how much power she had over patients’ lives, and she eliminated “routine mode” from her job right then, Johnson-Fannin said.

She demanded the very best of her students; routine mode was never allowed.

Chelsea Coronado had been fascinated with the world of pharmacy since she was a child visiting her mother who worked as a pharmacy technician.

Coronado is a first-generation college graduate. At first she was intimidated by the prospect of enrolling, and she admitted it took a while to relate to the college environment.

She held a job as a cashier in a pharmacy during high school, and when she graduated, she got her tech license. The more she was exposed to pharmacy, the more her passion grew.

Chris Alvarado also wanted to enter the profession for years, but with all his family living in San Antonio,  he didn’t want to move away to complete his studies. In 2006, the Feik School of Pharmacy became the first pharmacy school in San Antonio and the only private, faith-based program in Texas. 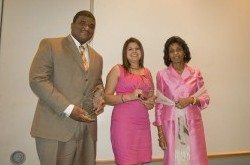 Dr. Arcelia Johnson-Fannin (right) presented the dean’s Shining Spirit award to Corey Cooper (left) and Chelsea Coronado. The dean chooses one or more students who take the lead in a group, keep the group on task and are solid in academics. “Their internal light is bright enough to shine on many,” Johnson-Fannin said.

“I never wanted to leave San Antonio, but when they built the pharmacy school here, I ran out of excuses,” Alvarado said. “Half of the pharmacy graduates are planning to stay in San Antonio. They were just waiting for the school to open.”

That was the case with Bryson. She wanted to attend pharmacy school, but at the time, the UIW pharmacy school didn’t exist. She got a nursing degree instead. “As a single mom, I couldn’t go to Austin or Dallas.”

Balance of school and life

Bryson found it difficult to keep up with her teenage son, Jeffrey, while allowing enough time to dedicate to her lessons. Often, she would get so wrapped up in schoolwork that her son would beg her to come spend time with him. “He told me, ‘You’re the hardest worker I know,’ ” she said.

She wanted to be a hard-working role model for her son. “I wasn’t going to stop,” she said. “That wasn’t an option.” So she had to create balance.

During the two years that she fulfilled her prerequisites, she was overwhelmed taking no less than 18 hours of classes every semester

At one point, a professor called her an overachiever and gave her permission to let go. Bryson, who had felt guilty for the time spent away from her son, remembers those words of advice clearly.

“You might not get an A, but you have to spend time with your family,” she recalled. 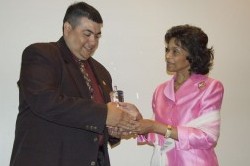 Chris Alvarado accepts the Pinnacle Award, the highest honor, which is given to the student who represents the epitome of a professional.

That was the turning point in her pharmacy education. In letting go, she found a balance between the classroom and family.

Corey Cooper, a native of Decatur, Ala., also struggled to balance his studies with his family life. His daughter, Amaya, was 5 years old when he enrolled.

As president of The Remedies, a pre-pharmacy association dedicated to academics and social support for pharmacy students, Cooper knew he needed to stay involved to stay motivated, but that also took up precious time.

“It was tough sometimes because I wasn’t able to give as much time as she needs or deserves,” he said. But he and his wife made an effort to show their daughter the benefits of hard work, and they also had family days when studying was off-limits.

Cooper’s father got into the habit of texting him each morning with inspirational quotes to help him get through the day. “Motivation is the name of the game,” Cooper said.

Plans for the future

The job outlook is rosy for the pharmacy graduates. Each graduate looking for a job has received an offer, though some have decided to pursue other avenues, including additional education.

Coronado was one of those graduates. In April, she received an offer for a two-year residency from Texas Tech University. Though it will be difficult to move away from her relatives and uproot her fiancé, Alex, from his job, she sees the opportunity as an investment in her family.

In a residency program, Coronado will be able to work directly with patients, an important step toward building the relationships that she finds essential to the job. 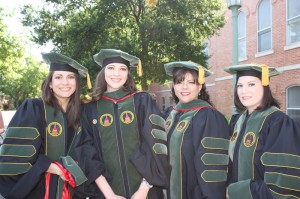 The salary for a resident is about $45,000 a year, significantly lower than what most of her peers will be earning. However, the residency program will open doors for Coronado. Her specialized training will qualify her for a number of other jobs, such as a faculty position, managing hospital patients at a pharmacist’s salary or working as a hospital in-patient pharmacist.

Cooper’s plans for the future are also on the road less traveled. After serving as a member of the United States Air Force for eight years, he wants to return to service. Now that he has his Doctor of Pharmacy degree, he hopes to work with Indian Health Service, a branch of the U.S. government that provides healthcare to American Indians.

He has applied for a position at a hospital outside Albuquerque, N.M. While in school, he had a rotation in Tucson, Ariz., so the desert landscape is familiar.

Cooper is excited about the possibilities that await him. “I have really good friends here, but there are so many opportunities outside San Antonio. Who knows what the future holds?” Cooper said.

Other graduates have accepted positions as traditional pharmacists.

Before earning his Pharm.D. degree, Alvarado worked as a technician at Oakdell Pharmacy, a local independent business on Louis Pasteur Drive. Now he will be working there as a pharmacist making $120,000 a year. Though he could have made $128,000 working at CVS, he values the working conditions and principles of Oakdell. He will have to work few Saturdays, and the pharmacy is closed on holidays.

It was years ago during his time as a tech at Oakdell Pharmacy that he started becoming more well-known in the community, thanks to his willingness to go above-and-beyond in his effort to help his customers.

He worked with lots of employees from the San Antonio Fire Department and Police Department, and at the time, these civil workers were required to pay full price for their medications. Though they were later reimbursed by the insurance company, it still meant more out-of-pocket expense to get the needed medications.

One customer asked Alvarado if he could pay the discounted price and shift responsibility of asking the insurance company for reimbursement over to Oakdell. After speaking with his boss about the request and promising to be responsible for the extra work, Alvarado was given permission to begin offering customers the discounted price when they arrived at the pharmacy.

The customer was so pleased with the extra service that he quickly spread the word to his co-workers. As a result, Alvarado helped generate $1 million in sales at the pharmacy.

Even now when there are insurance cards to reduce medication costs immediately, many customers still do business at Oakdell because of Alvarado’s past efforts to make their lives easier.

Dr. Henry Cisneros, mayor of San Antonio from 1981-89 and secretary of Housing and Urban Development (HUD) from 1993- 97, spoke at the May 7 Commencement ceremony.

His comments to the first graduating class of pharmacy students came full circle. In September 2006, he spoke at the first class’ White Coat Ceremony as they began their pharmacy studies.

“It was a very special day,” Cisneros said at graduation, “and for me to be back four years later recognizing that of the 80 who were present that day, [67] are here tonight. Not a bad record. Congratulations to the [67].”

Advice to the young

Alvarado didn’t hesitate to tackle a challenge as a tech years ago or when he entered the pharmacy school at UIW. And that’s his advice to the incoming class of pharmacy students: “Don’t take the easy way out. Challenge yourself. 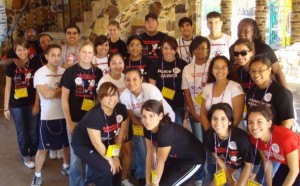 The Pre-Pharmacy Association, The Remedies, volunteered for the Alzheimer’s Association Memory Walk on Sept. 26, 2009. The group assisted with filling out paperwork, handing out t-shirts and requesting signatures on a petition for more research funds from Congress.

“I wish I could have spoken to the students who dropped out after the first few weeks. I think they needed some encouragement. I’d say to them now: Keep going; it’s going to pay off,” he said.

“Have friends who motivate you to get you through it,” she said. “You need a good support system. It’s stressful to balance family life and school life. You aren’t always going to be a 4.0 student when you’re trying to balance. You’ve got to let go sometimes.”

A while back, Bryson found herself encouraging a single-mom first-year student, saying “You can do this” and urging her to spend time with her family. When she saw the look of relief on the other student’s face, Bryson realized that was probably the same look she had when she learned balance of school and family.

Johnson-Fannin also has some sound counsel for incoming students.

“Make sure this is where you want to be,” she said and asks: “Do you want this? Or does someone want it for you? Do you enjoy interacting with people? Do you enjoy helping people? If that doesn’t turn you on, you don’t need to be in pharmacy.” 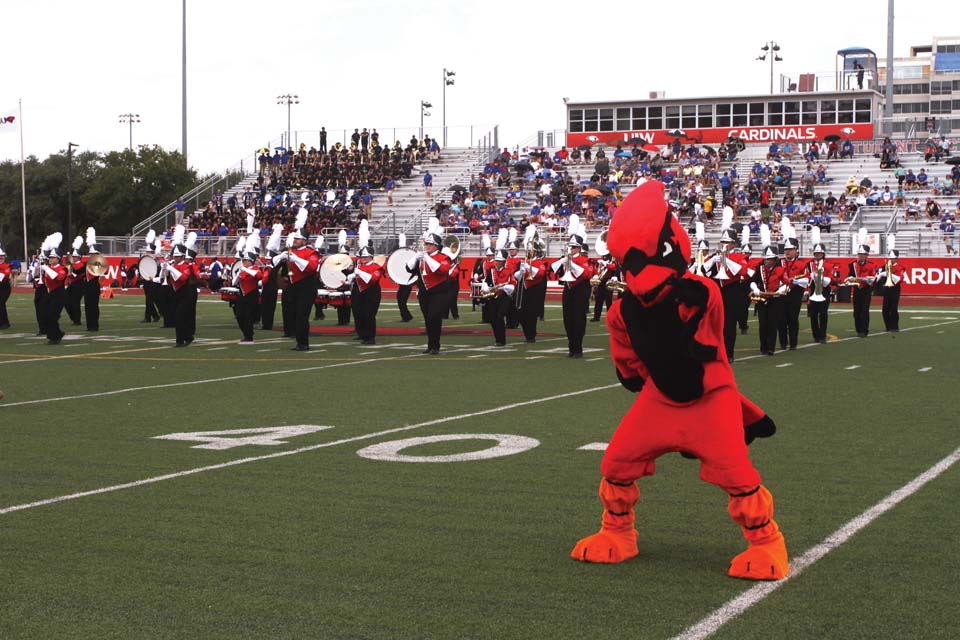 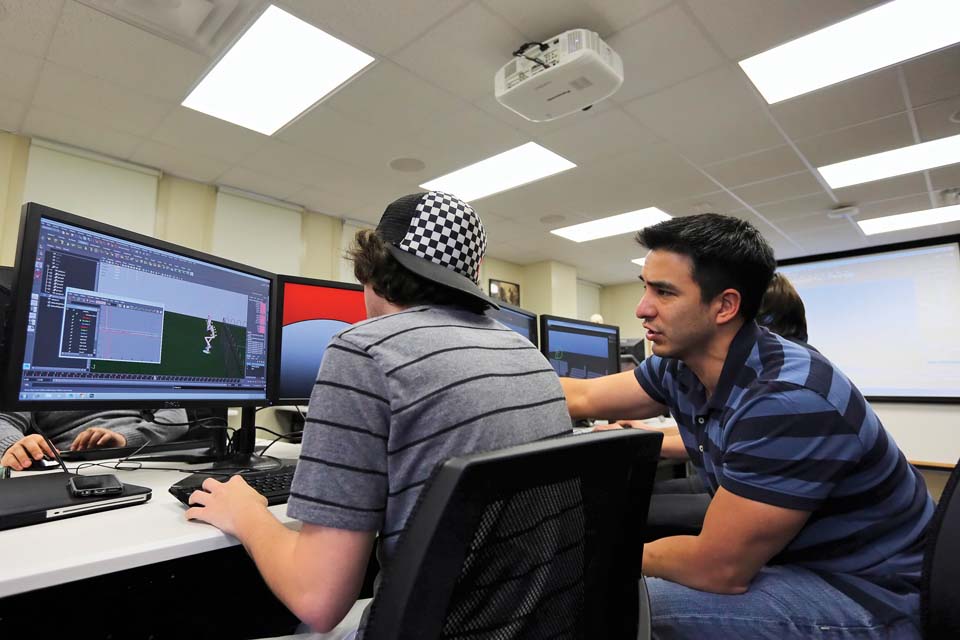